Did you know that Veeam ONE has a tool called deployment projects that has the ability to simulate how a task such as adding or evicting hosts and VMs impacts your virtual infrastructure? These simulations help us to review predicted resource capacities against future resource demand, provide practical recommendations and help identify potential resource shortages. It’s a quick and easy way to check your resources before making small or large changes. Think of it as a way to perform due diligence and gain insight before making any changes to your virtual environment.

Once we have logged into Veeam One Report, open the Workspace section, in the hierarchy on the left, we select All Deployment Projects.

If you wish to change these thresholds you can by clicking on the thresholds button which is highlighted below.

Now that we have reviewed the current thresholds, we can create a deployment project, to do so we simply click Add.

The ‘Add Project’ dialogue box will open and ask us for the following information,

In this example below, I entered a name of ‘Add VM Simulation’, the creator is the administrator account used to create this deployment project and I have selected an ESXi host and datastore. 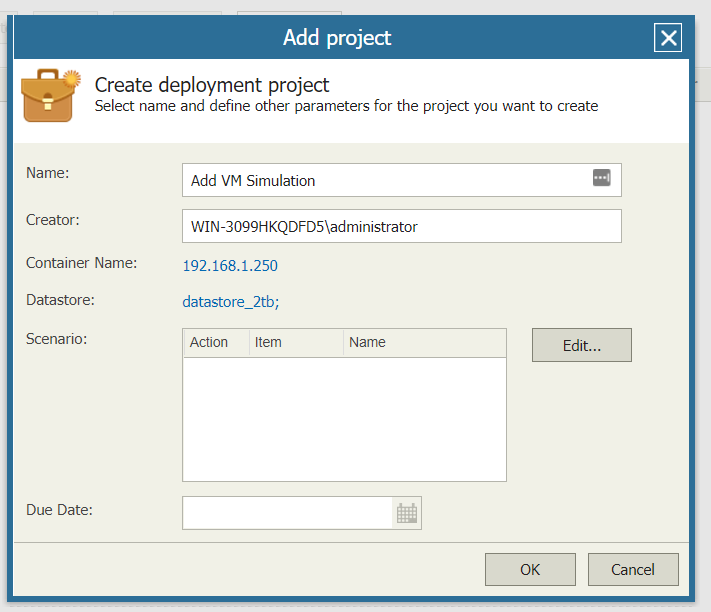 The next step is to define the scenarios for which we wish to simulate because I wish to simulate the adding of  VM I have chosen to Add the item ‘Virtual Machine’, we can also choose to Evict VMs, Add Hosts or even Evict Hosts.  I have provided screenshots below of the steps I took to define a virtual machine being added to my selected ESXi host. 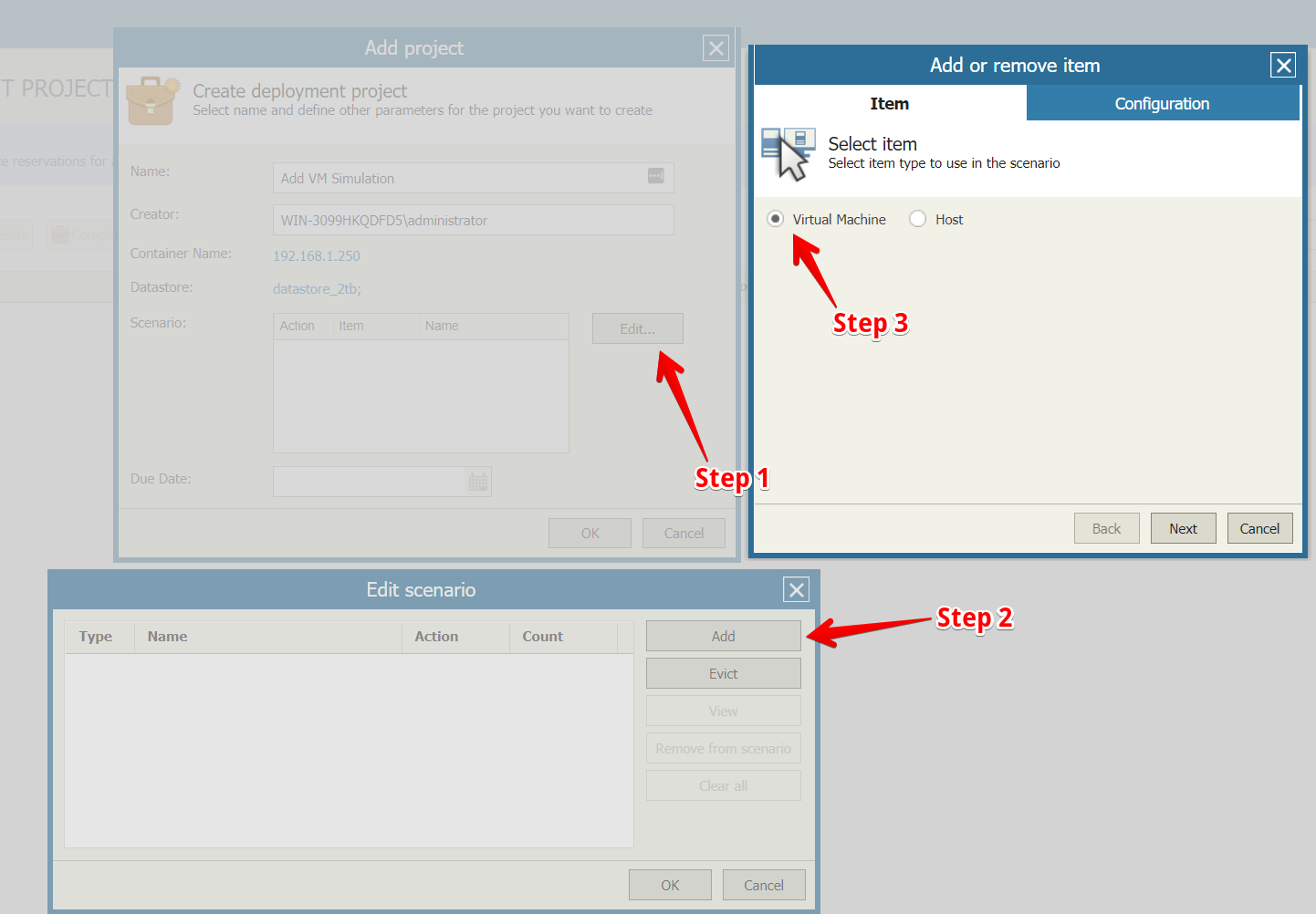 At the next step, we need to define the VM configuration, we have two options here. We can explicitly define a VM configuration by the VM name, the number of CPU cores and CPU clock speed, the amount of memory resources, the amount of space allocated for a virtual disk and the number of disks. Alternatively, we can choose an existing VM that will be used as a template in the scenario.

In this case, we defined the resources manually as shown in the below screenshot 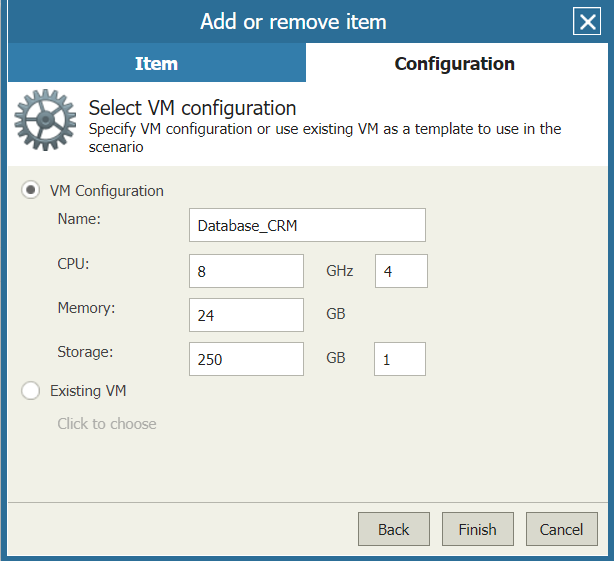 Whats important to mention here is that we can easily simulate small change and large changes simply by adding the required number of items to the Deployment Project. For example, we may be planning to remove an old ESXi host, adding a new ESXi host and looking at provisioning 4 new VMs. Such a simulation would look like the below screenshot.

After accepting the scenario configuration we need to specify the date for when the deployment project must be completed, in this example I have chosen today’s date. 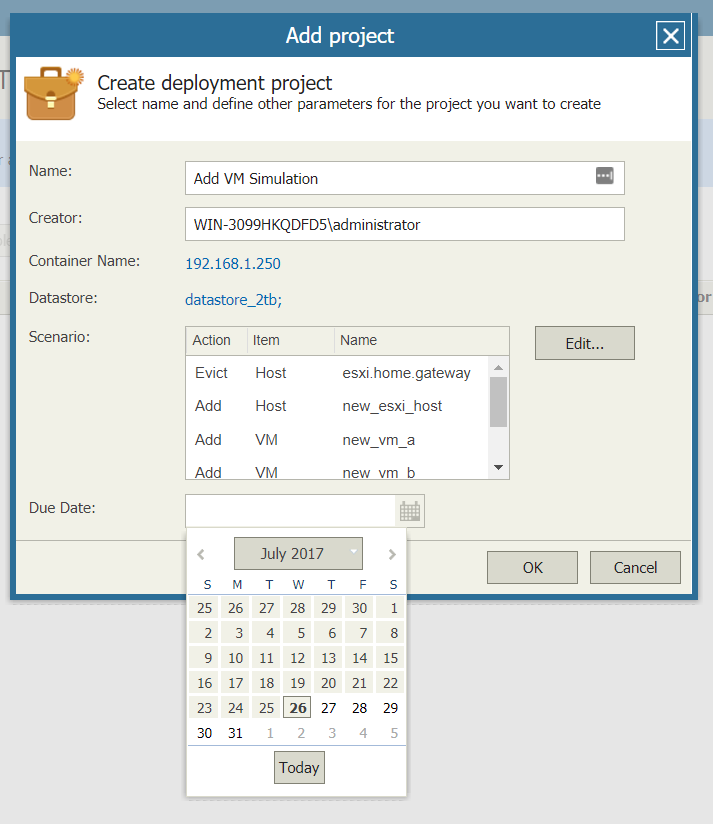 To build the project we select the Deployment Project and click build.

Deployment projects may have one of the following states, its important to be aware of the different states when buiilding Deployment Projects.

How Deployment Projects are calculated

The following factors are used in the analysis:

The following algorithms are employed to forecast workloads:

Once the project has been built, we can see if the simulation was successful and view a report detailing the outcome of the predicted deployment. The deployment project will report as successful if future resource utilisation and performance metrics do not breach the performance thresholds that we covered earlier in this article, remember these thresholds can be tweaked at any time if necessary.

Tentatively successful projects (projects completed with warnings) are caused by resource consumption reaching the thresholds defined but not reaching 100% consumption. For example, our memory max load usage is set to 80% and the simulation reaches 85% usage, we have crossed the threshold but we didn’t reach 100 percent consumption.

By clicking on View Report, we can see a detailed breakdown of the Deployment Project 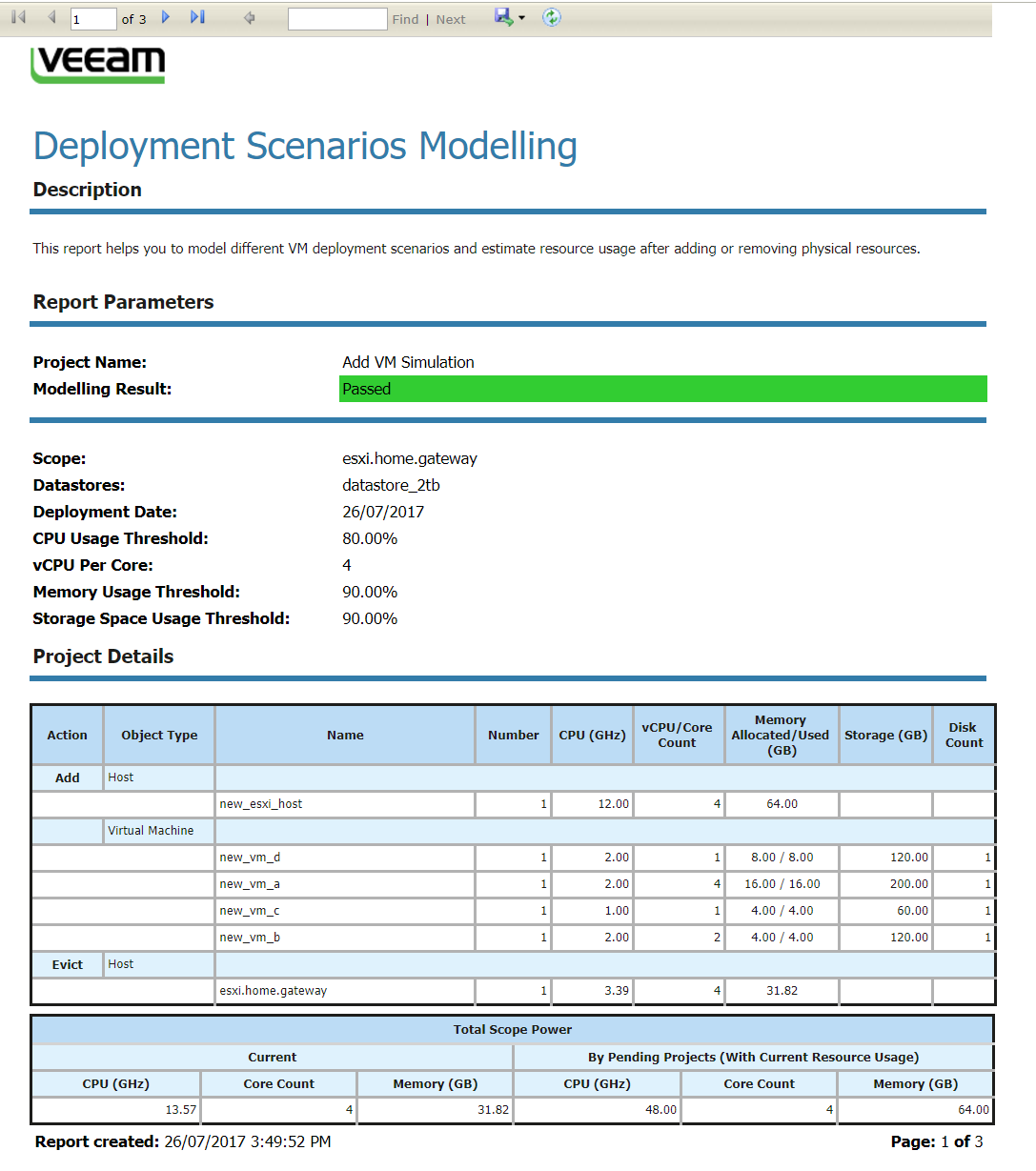 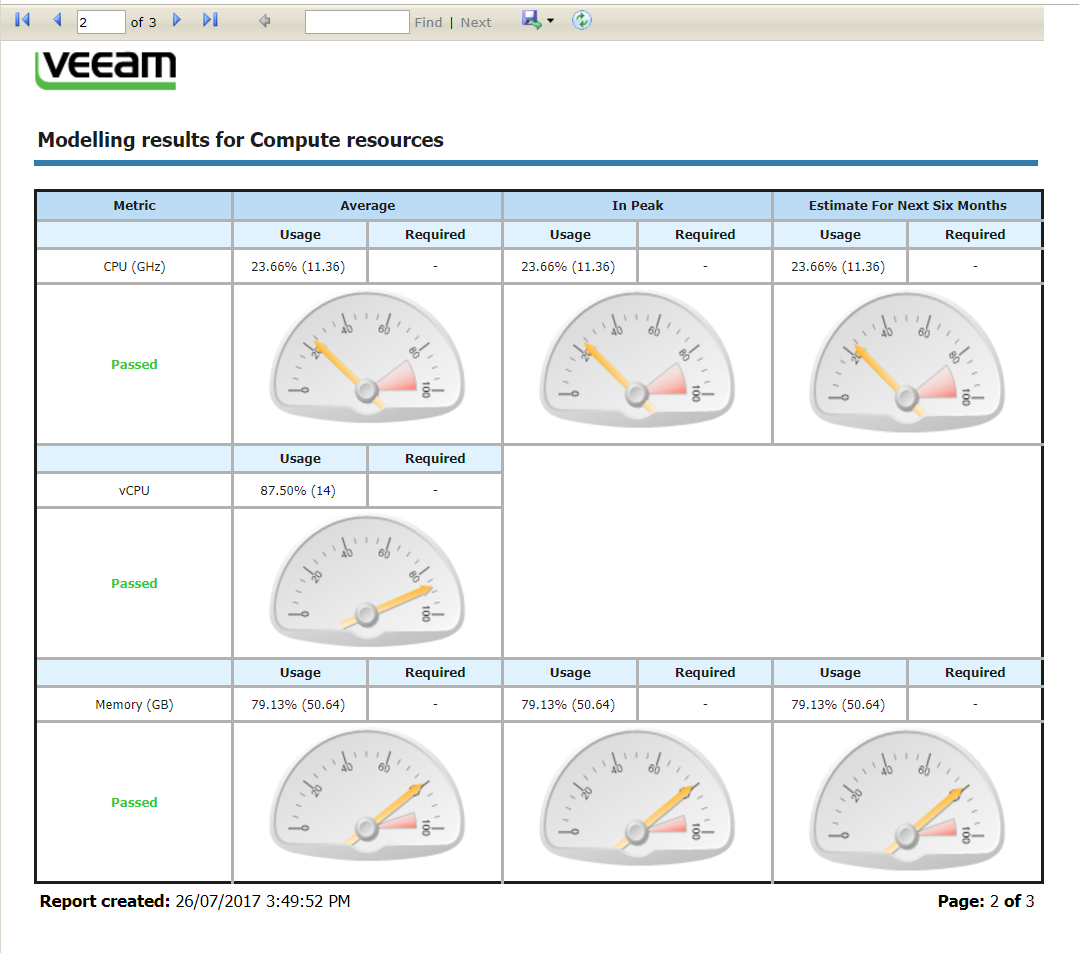 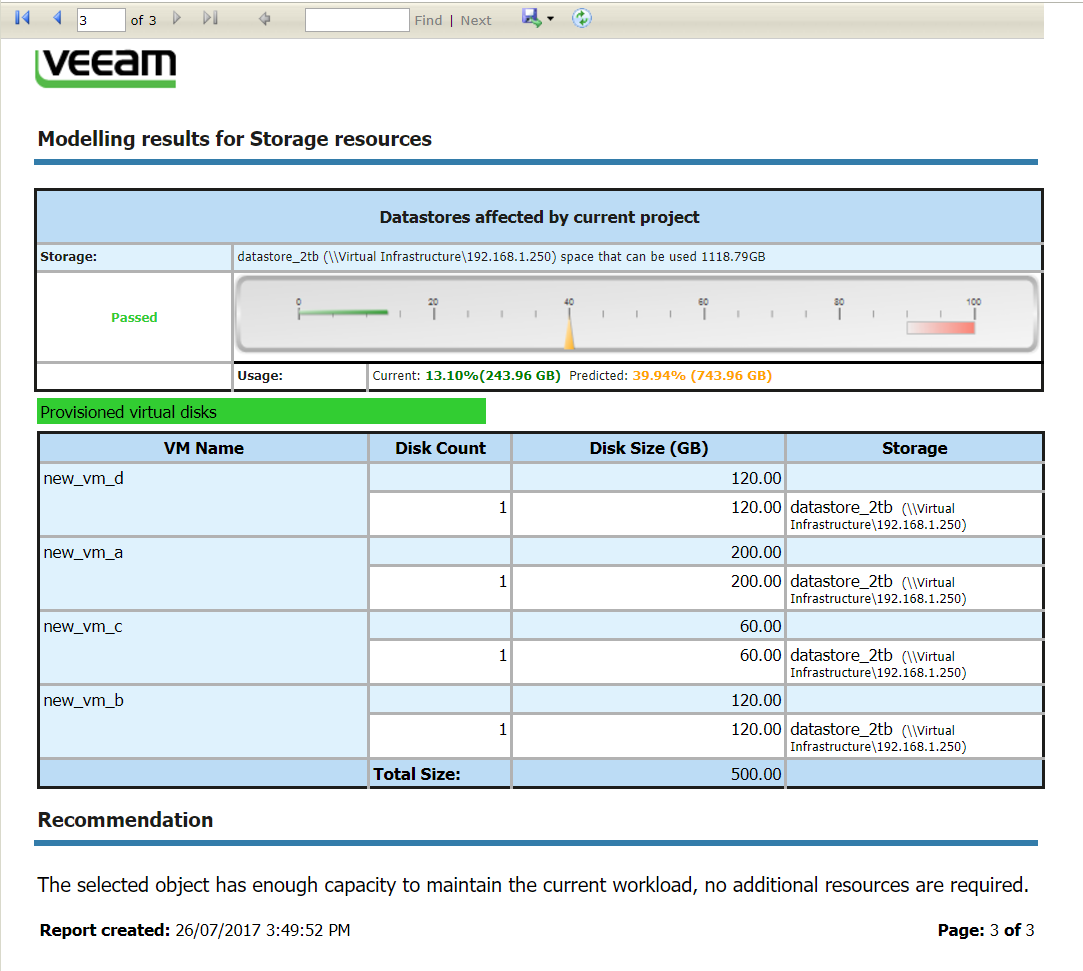