One of the lesser known features of Veeam ONE is its ability to divide the virtual environment into various groupings and categories, essentially creating a view that is easier to digest from a business standpoint. This view can be valuable when you consider that most tools we would use such as vSphere client or SCVMM/Failover Cluster Manager are often configured to present information and data, for say, a more a technical perspective, something which might not be relevant or even make a whole lot of sense for all business stakeholders. 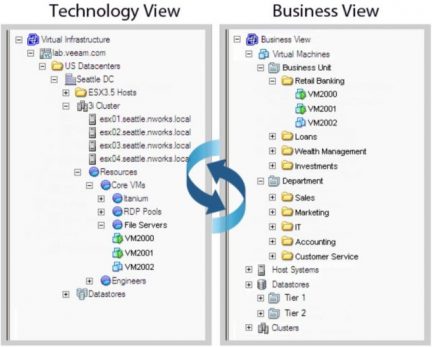 By leveraging Veeam ONE Business View to group and categorise these objects into a hierarchy that makes more sense from a non-technical perspective such as office departments, projects, SLAs and much more we can easily review and report on resource allocation and utilisation based on these groupings.

Now that part is out of the way, I wanted to demonstrate how Veeam ONE Business View can be configured to help automate this process. We can configure set & forget rules and policies that organise objects into these group and categories. I’ve written this article to dive further into how one can configure Veeam ONE to categorise our infrastructure. 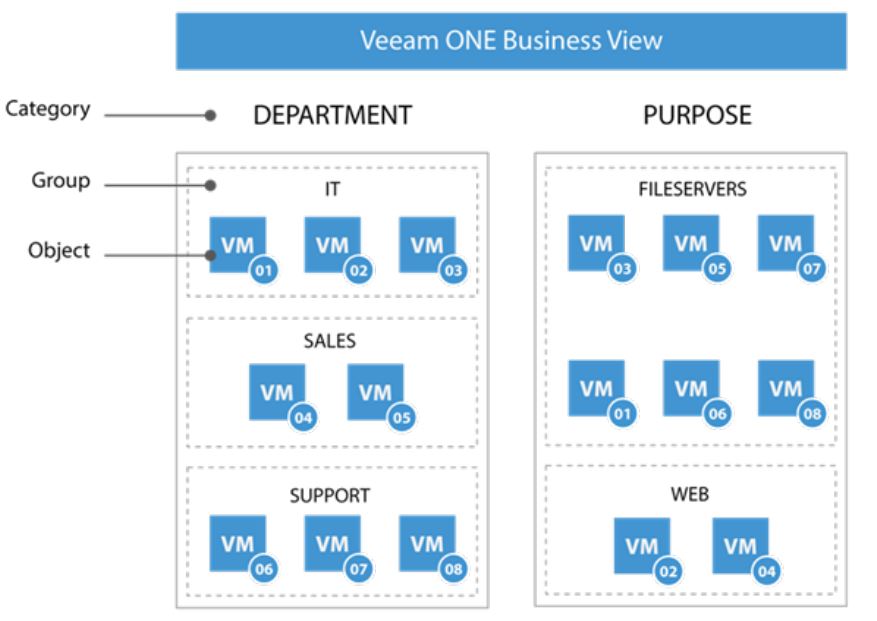 Out of the box, Veeam ONE Business View comes with a number of predefined categories, these are a great start but it’s possible that these may not meet your exact requirements so it’s a good thing that we can create our own categories then.

Creating categories in Veeam ONE Business View is quite straightforward,  we can create up to 50 categories, this includes both the predefined and any custom categories. We create our own category by clicking ‘Configuration’ on the top menu, then clicking ‘Categories’ on the left-hand pane then clicking ‘Add…’.

Remember that a category is a logical division or sector of the virtual infrastructure, we define and organise these categories further by use of groups. A category must contain one or more groups. So with that in mind, I’ve chosen to create a new category for a business department, namely the ‘Research and Development’ department.

I’m planning to define this business department with multiple groups later in this article.

In the screenshot above we’ve created a category for the RnD Department which will be using a ‘static group’. This means we can add and remove objects manually or create a categorisation rule that populates groups with object based on specified criteria.

If we had chosen a ‘dynamic group’ it would require defining ‘grouping expressions’, the grouping expressions run against discovered virtual infrastructure resulting in groups automatically being created and including objects within the groups. I’ll expand further on groups in the next section.

We used ‘RnD’ in the tag category which means Veeam ONE will write categorisation values to vCenter Server. The “Not Set” groups on charts options has two available options, either ‘Show’ or ‘Hide’. Choose ‘Show’ if you want to display information about uncategorised objects on charts. Choose ‘Hide’ if you want to hide information about uncategorised objects on charts.

We used ‘Show’ in this category because I don’t care if uncategorised objects (virtual machines in our case) appear as we can easily exclude them by editing this category again if the need arises.

So on the last page, we created a category with the group type set to ‘static’, if your interested in seeing what a ‘grouping expression’ looks like for a dynamic group I’ve taken a screenshot here.

By choosing a static group, it allows us to ‘Add..’ groups to our category as we see fit. In the below screenshot I’ve defined a group for the ‘Project FarScape’ team that exists within the RnD Department. 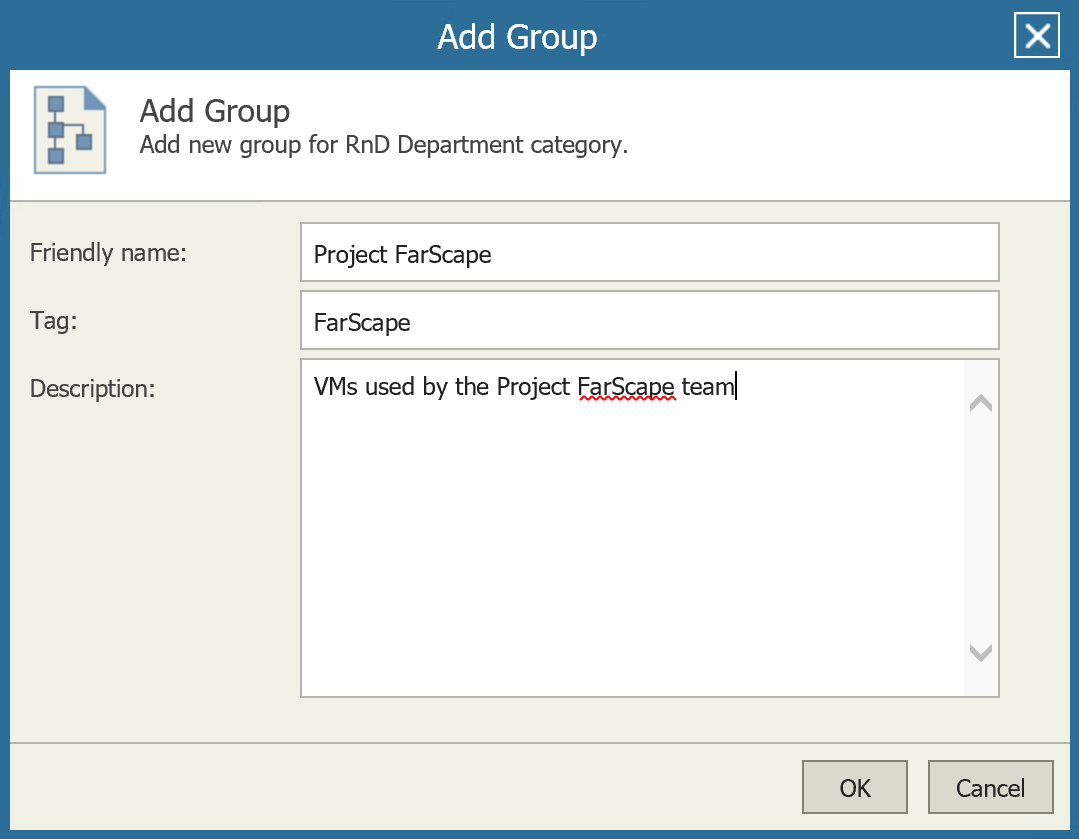 At this time, we can add any additional static groups that we would like to define our objects into, in this example I’ve added some another team within the RnD Department.

Once this is finished we can create rules to define how objects will be automatically added to these static groups.

So we’ve created a custom category and then created some static groups, now we need to start populating these groups. We can add objects manually or we can create categorization rules that will populate static groups automatically. The quickest way to get going for an environment that doesn’t change often is adding objects manually but today, on the other hand for larger environments that change frequently on, it’s going to be much easier to automate the population of these static groups by creating categorisation rules.

So under the ‘Rules’ option found in the left-hand navigation pane, we can ‘Create New…’ rules.

A new window appears asking for a name and description for our rule. 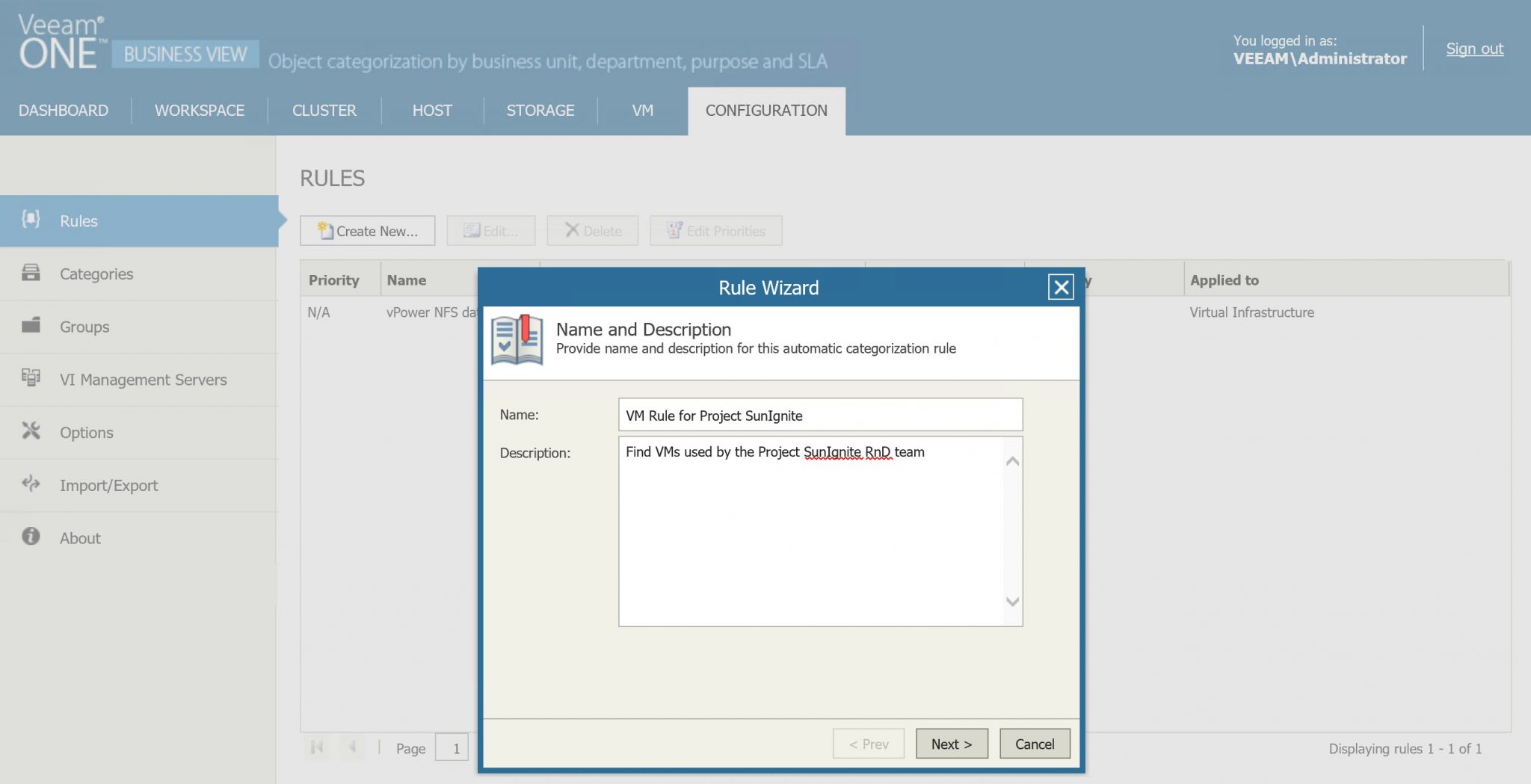 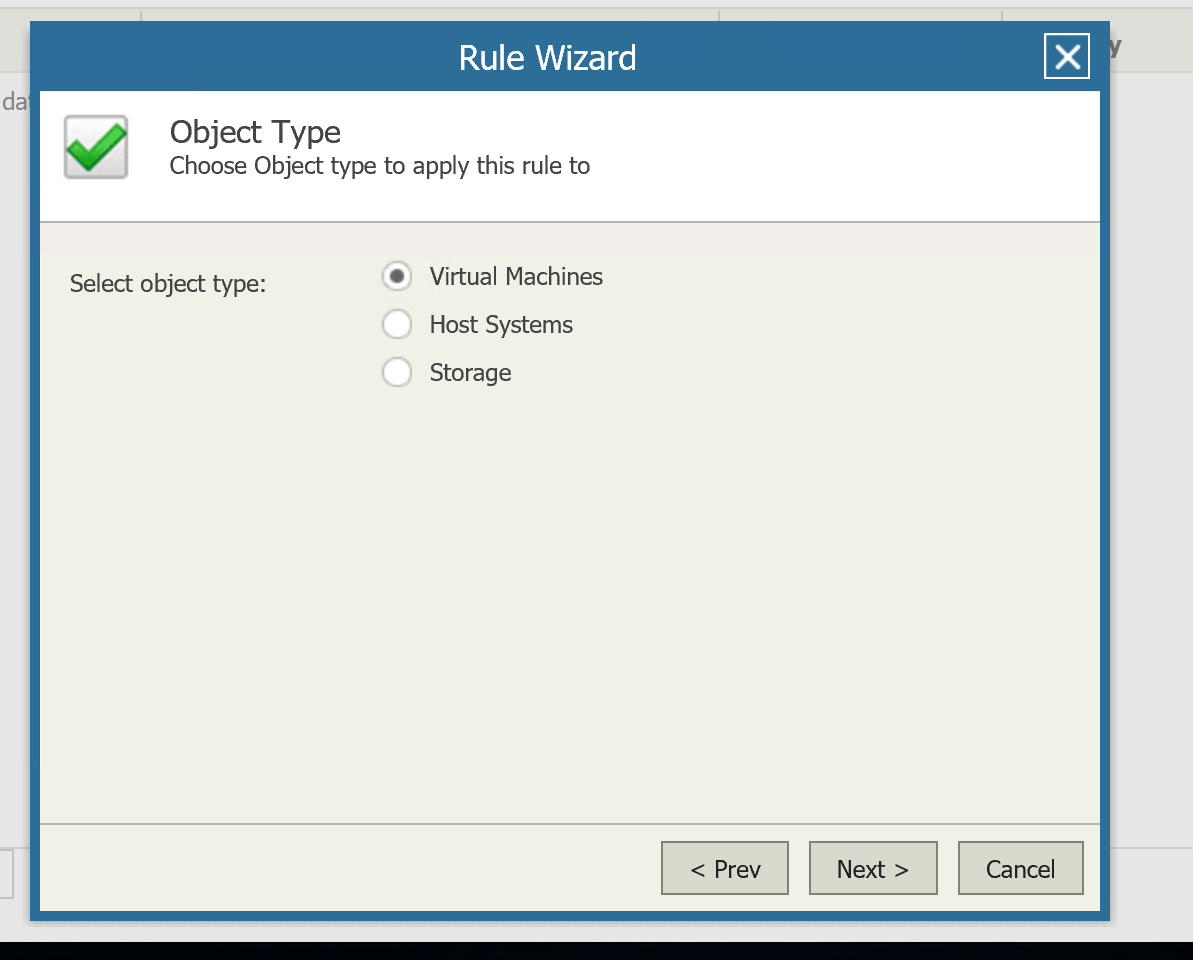 We’ve selected all Infrastructure, here we could fine tune at a more granular level what infrastructure to scan. 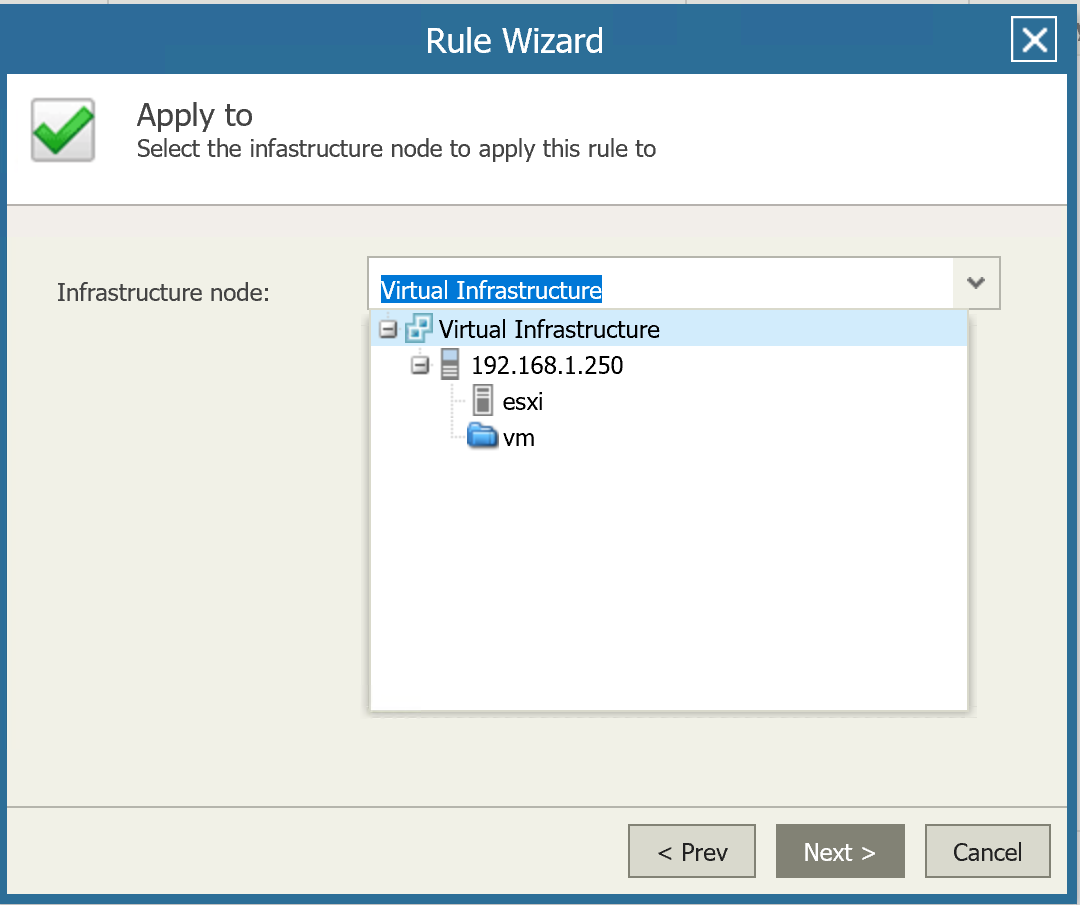 This next section is really up to you, its where we define what the categorisation rule is looking for, we can define using the name of the object, its properties or location. The object name and location option is a bit redundant since we can specify these in the object properties anyway. 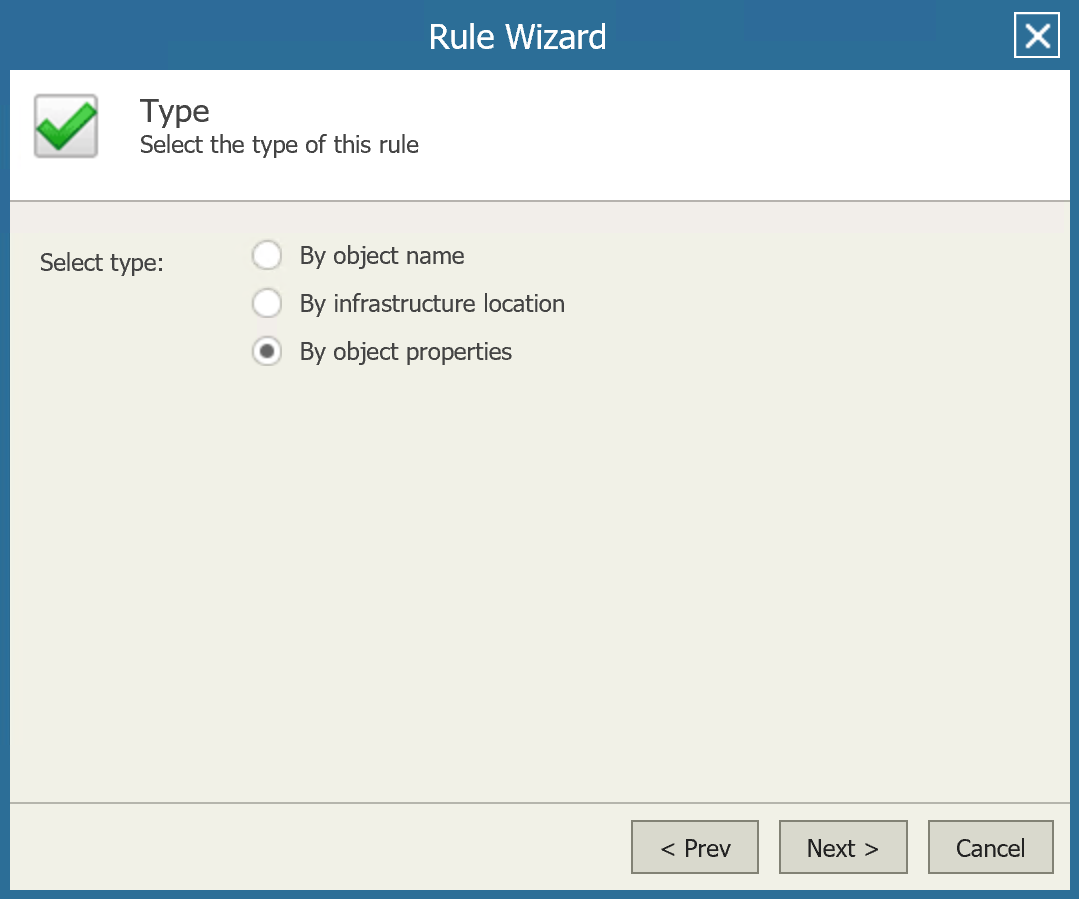 I was quite limited by the size of my homelab so I’ve for something simple and created a rule based on the VM object name. 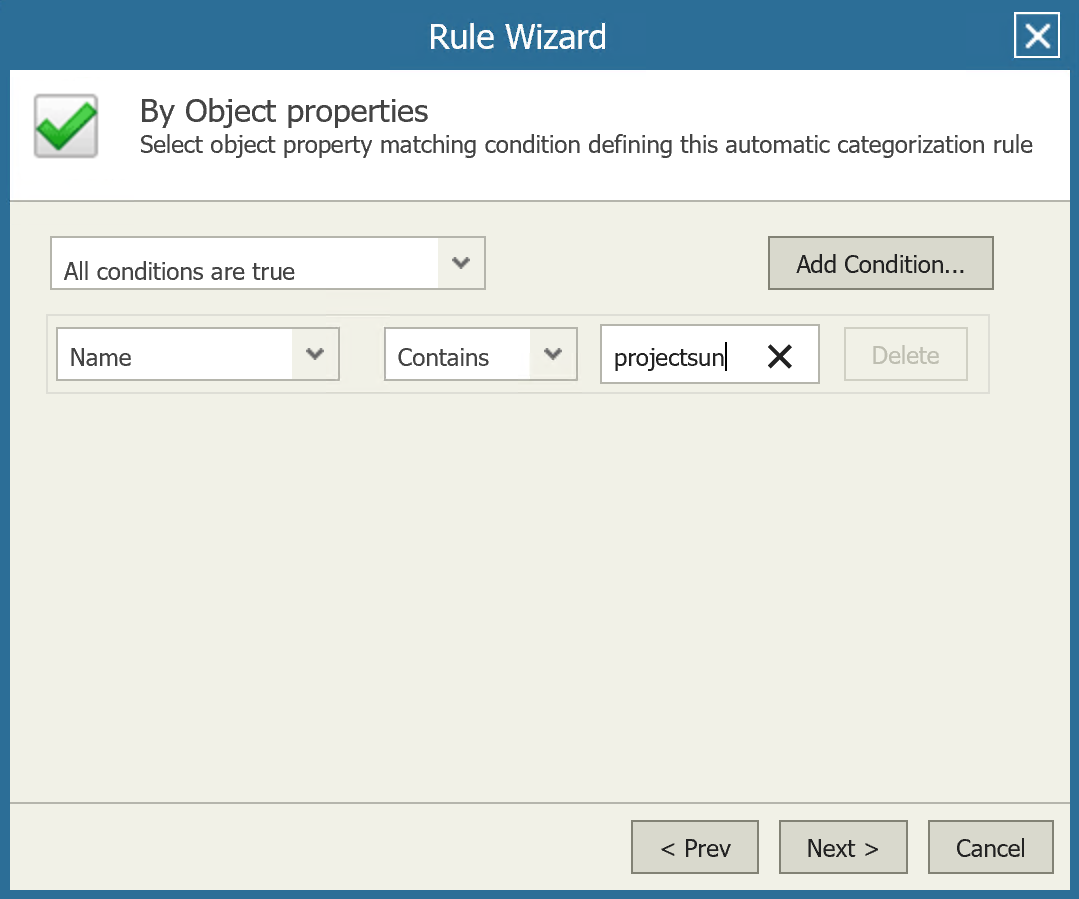 On the next page, we define which static group the objects will be categorised into, we can also define if the rule is applied automatically or requires manual approval. 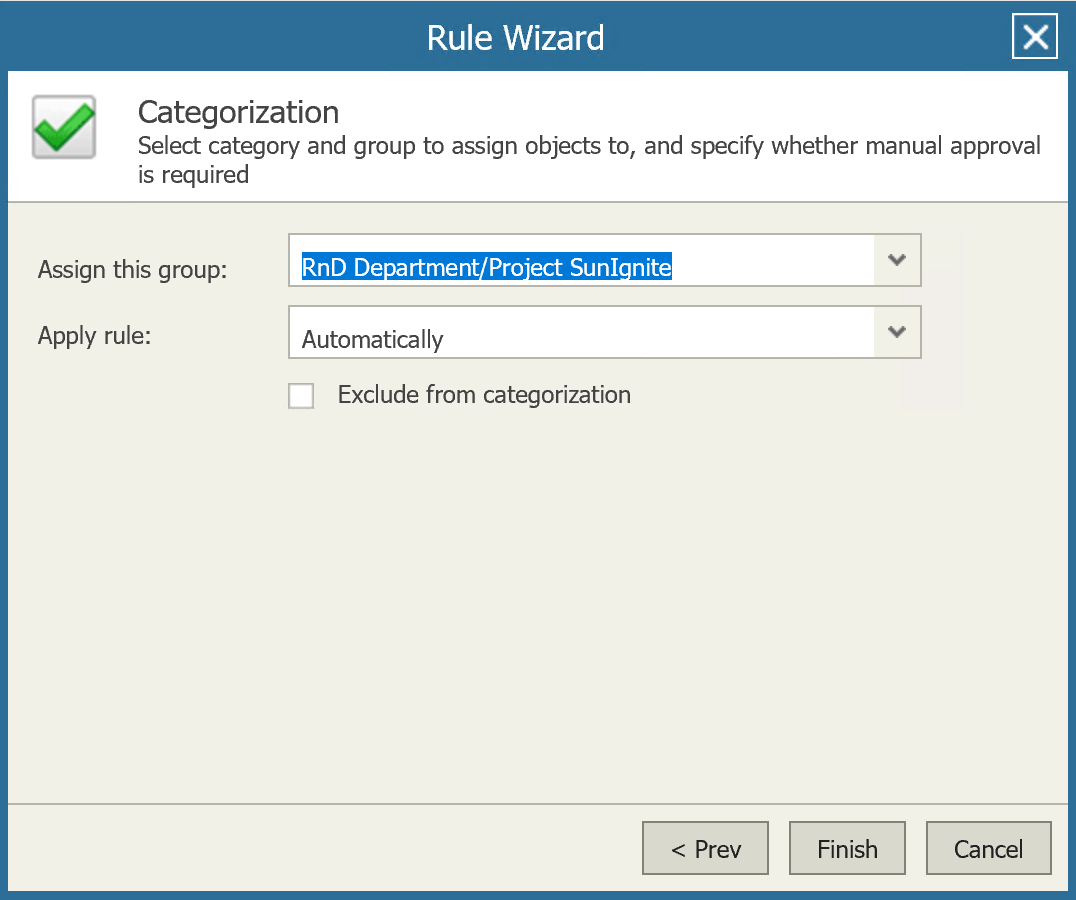 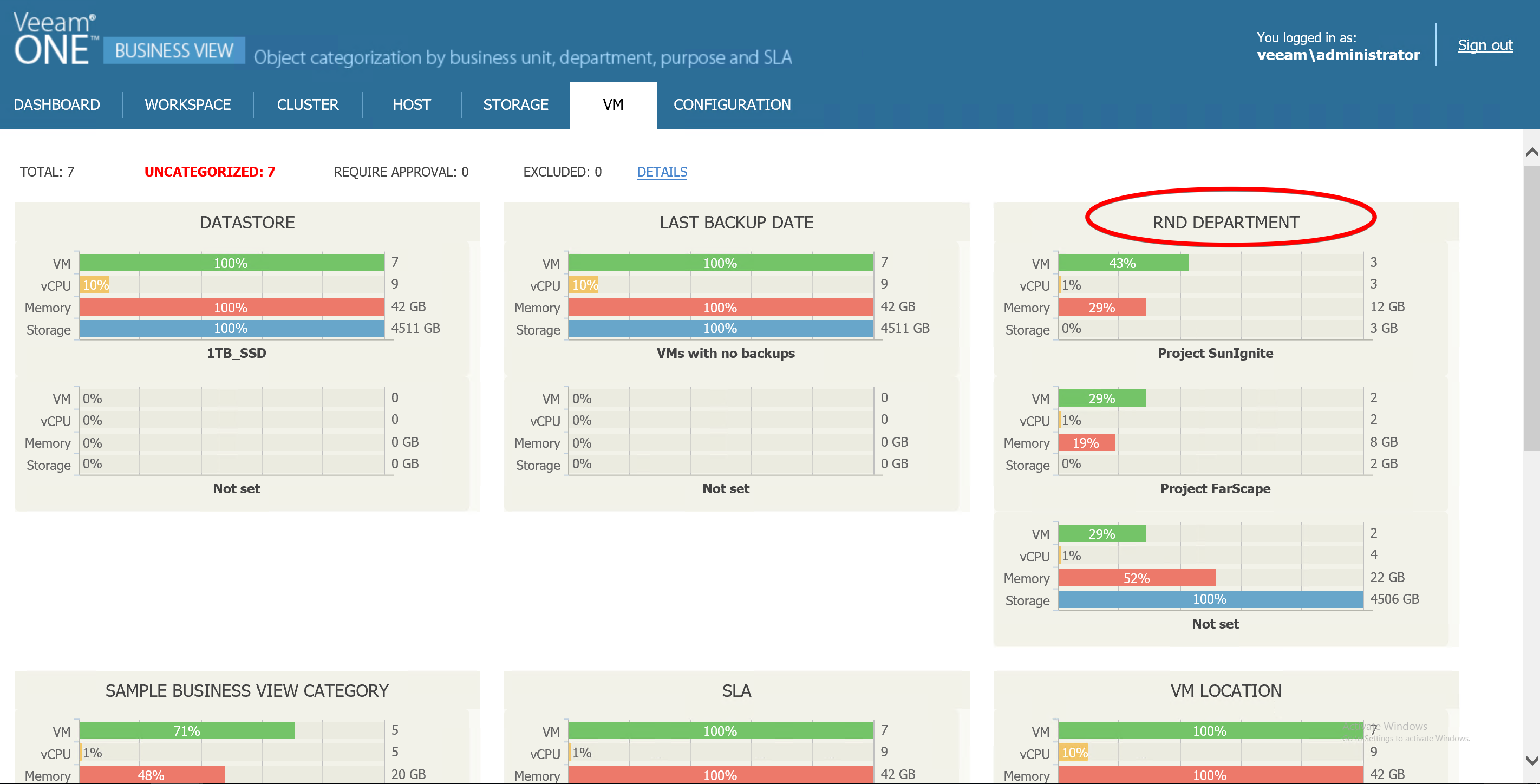 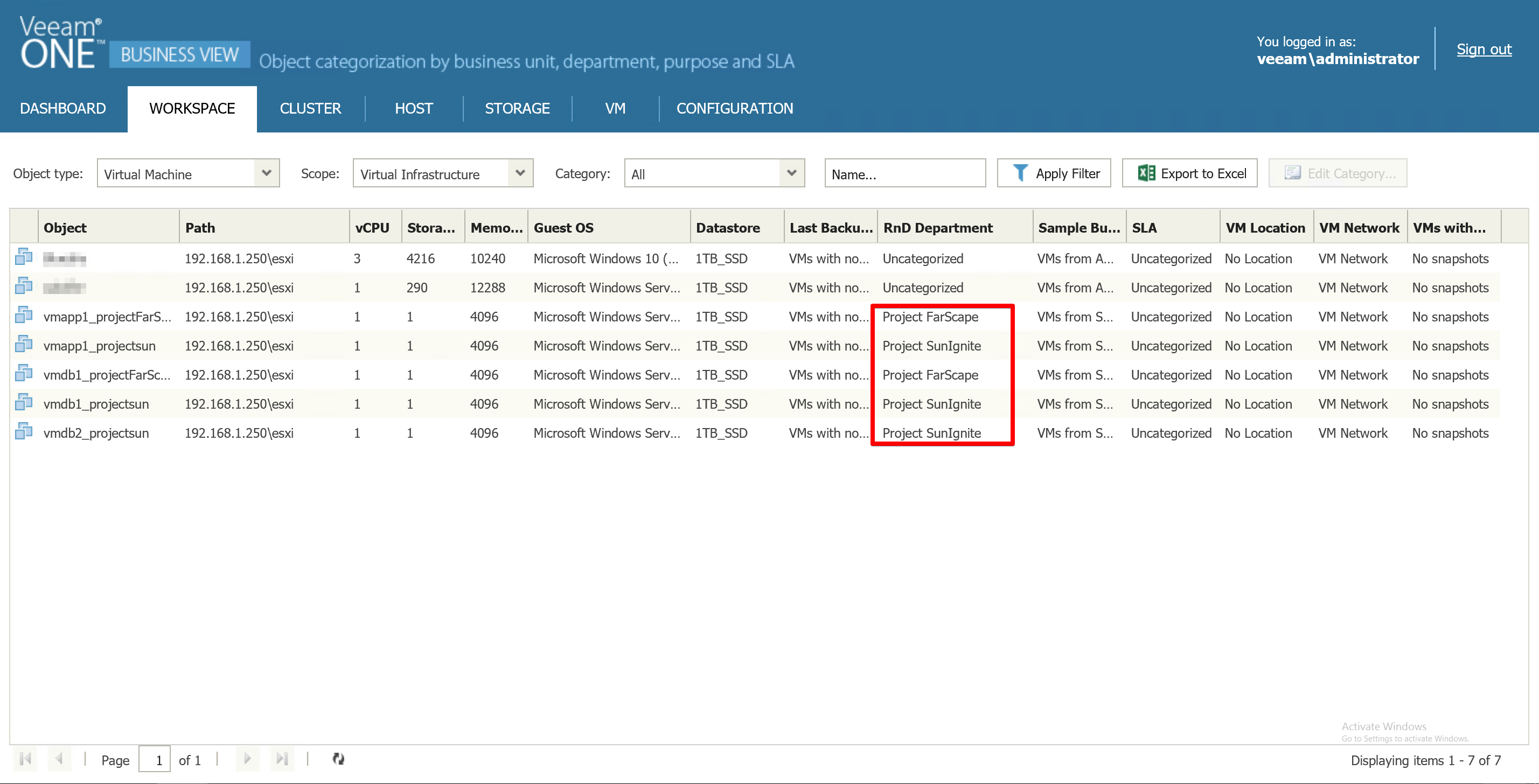 As you can see, nothing very exciting here, where the magic really lies is in Veeam ONE Reporter and Veeam ONE monitor which can now leverage these categories from Business View to categorise and group virtual objects into a view that hopefully, makes more sense for the key business stakeholders.

For example, I can now generate reports such as alarms, auditing, billing, configuration, forecasting, health state (just to name a few) very easily just on the virtual objects we have categorised. 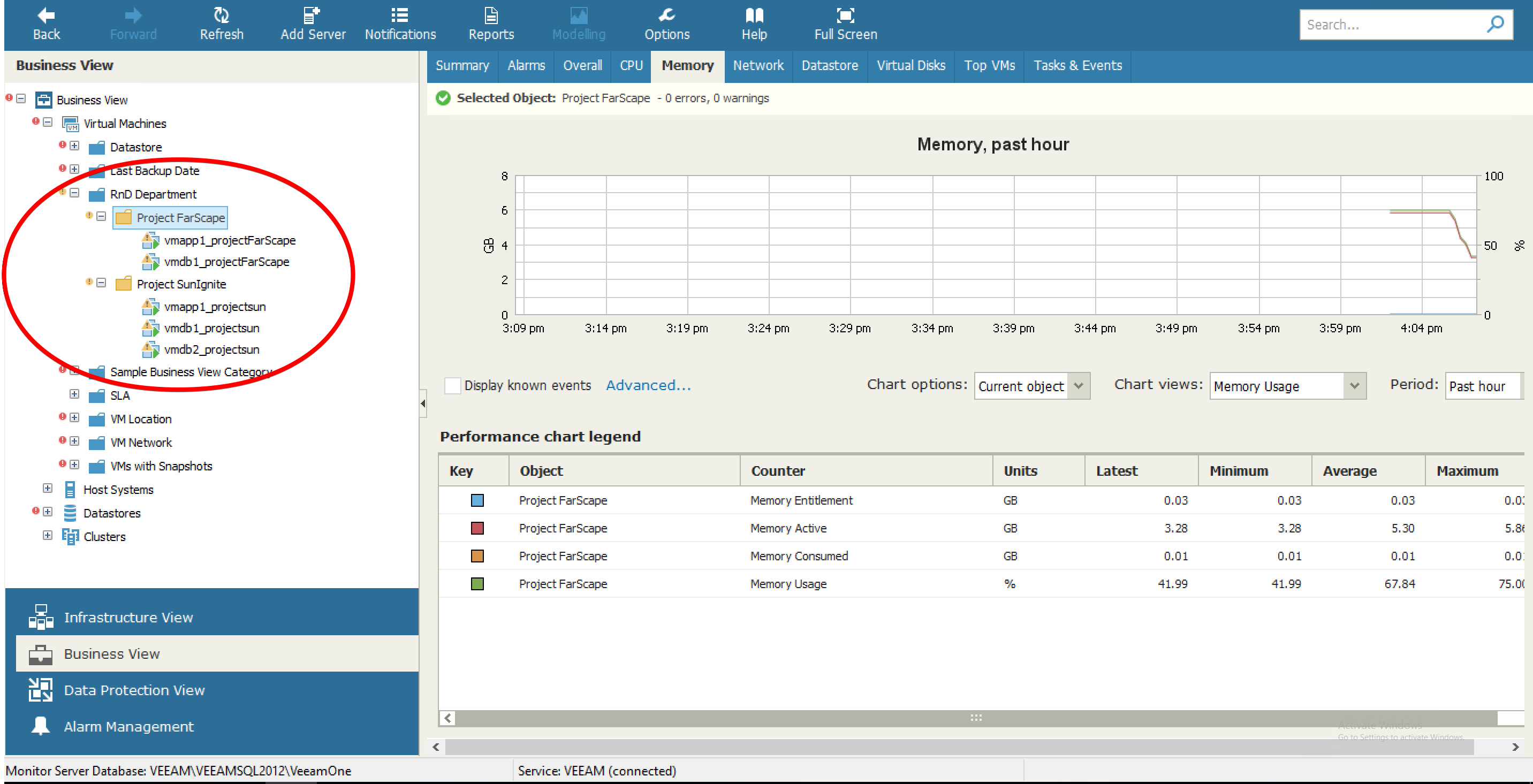 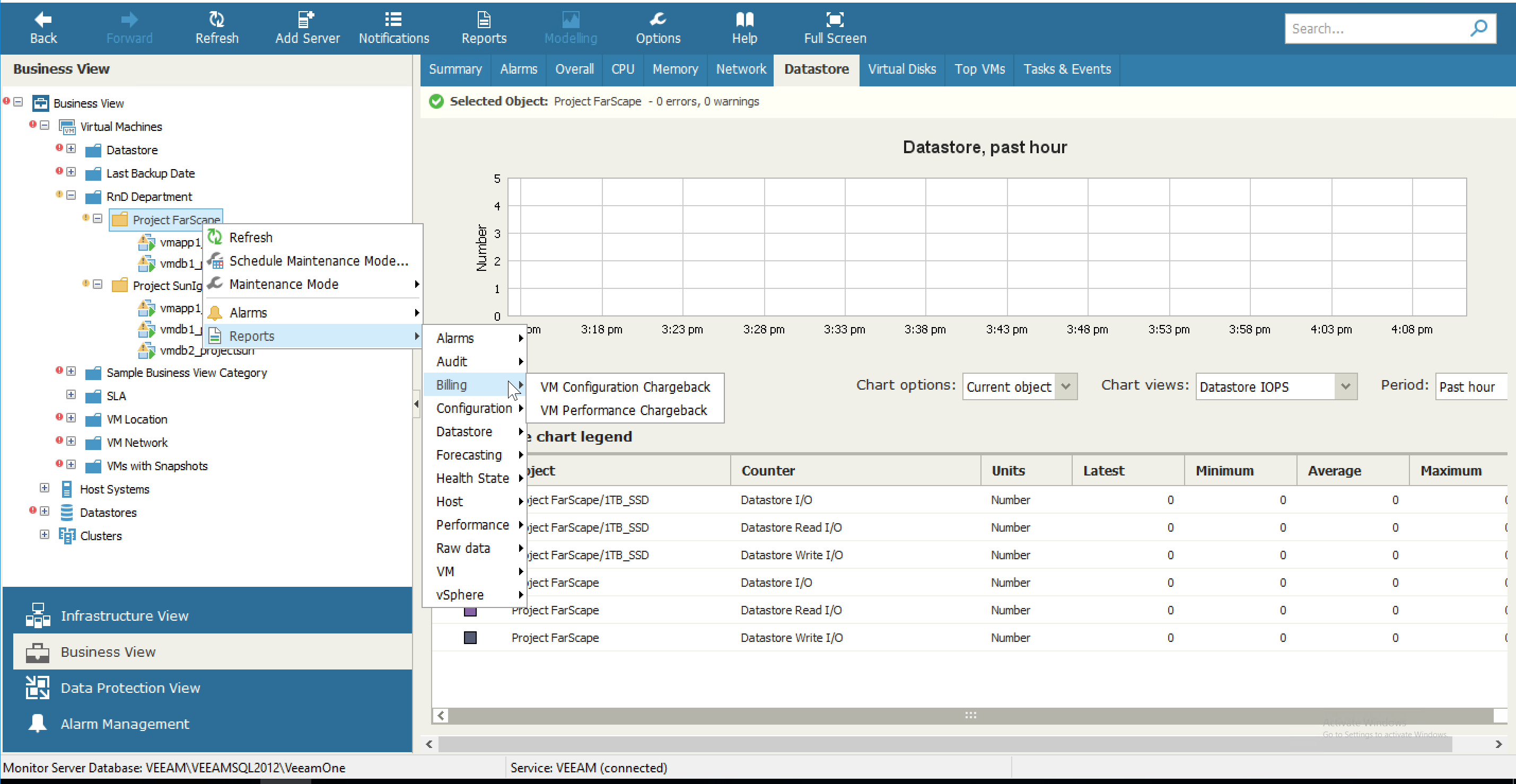 To be expanded at a later date.

2 thoughts on “Business Categorisation in Veeam ONE Business View”