Ransomware attacks continue to rise, with constantly evolving sophistication and complexity. A key part of ransomware resilience strategy is backing up data on a regular basis and implementing a strong line of defence against threats targeting the backup data. Adopting industry standards for data protection such as 3-2-1 rule, offline backups and immutable backup storage are effective techniques to protect backup data sets against malicious attacks. Now let’s discuss how to make your FlashBlade system an immutable backup storage target with SafeMode snapshots.

A storage snapshot is a point-in-time, image-level view of data that are impervious to ransomware. This immutability makes them an ideal layer of defense against ransomware. The problem with storage snapshots is they can still be removed by rouge admins or attackers if they gain access to the storage array management. In the case of a Pure Storage system, the deleted snapshots are temporarily stored in a ‘destroyed state’ that is similar to a recycle bin. If these snapshots are not recovered in a timely manner, they will be auto-eradicated and can even be manually destroyed prior to the auto-eradication.

The SafeMode snapshots on the other hand, cannot be deleted, modified, or encrypted either accidentally or intentionally. This prevents the manual and complete eradication (permanent deletion) of data backups that are stored within the FlashBlade. Due to their immutability, the SafeMode snapshots serve as an additional mitigation mechanism against ransomware attacks or rogue administrators.

Once the SafeMode snapshots are activated, snapshots for all the file systems get created that incurs additional capacity utilisation on FlashBlade. Therefore, prior to SafeMode activation, it is recommended to consult your local Pure Storage Systems Engineer to validate FlashBlade capacity sizing that is required to support SafeMode snapshots.

Pure Storage has developed a highly secured, well-defined process on how FlashBlade customers collaborate with Pure Storage Support to enable SafeMode or how to make changes to an existing SafeMode policy. Only authorised users from the customer organization can work directly with Pure Technical Support to configure the feature, modify the policy, or manually eradicate SafeMode snapshots. We decided not to discuss the full details here as we do not want potential ransomware perpetrators reading this post to be benefited from the information. You are always welcomed to engage your Pure Storage Sales Team if you’d like a more detailed walkthrough of how SafeMode works, how it is enabled, and protections against it being disabled.

Upon agreement with the customer, Pure Support performs a pre-activation health check that involves checking the FlashBlades growth trend to ensure there is sufficient capacity to enable SafeMode.

Validating the operation of safemode

Once Pure Support has enabled SafeMode, validation is required.

The screenshot above displays a list of snapshots of the file system <Veeam-NFS-Repo>. There are 2 distinct snapshot groups presented here.

When attempting to eradicate a SafeMode snapshot, the file system will be moved to a destroyed state.

When attempting to eradicate (permanently deleting) a SafeMode snapshot, a warning message will be displayed as shown below.

It is evident that under SafeMode, the administrators cannot manually remove a filesystem or snapshots from FlashBlade.

A sophisticated ransomware attack does not just encrypt production data, perpetrators often target the backups to ensure organisations cannot recover. There are cases where the backup servers were compromised by ransomware attacks and became inaccessible. Other scenarios could be when perpetrators and/or rogue admins gained access to the storage systems and attempted to delete the file systems and snapshots hosting backup data.

To demonstrate the effectiveness of SafeMode, we have assumed that access to both the Veeam console and FlashBlade interface has been gained. From the Veeam console, a ‘Delete from disk’ operation was performed on all backups that are stored on the FlashBlade NFS repository. This results in the deletion of the following:

The following screenshot depicts the status of <Veeam-NFS-SafeMode-Repo> after all of its content is removed from the corresponding Veeam backup repository. Note that the used space displays 0TB as the file system is storing nothing.

The NFS file system that is used for the Veeam repository was then destroyed from the FlashBlade console.

If other protection mechanisms are compromised, the FlashBlade storage becomes a solid final line of defence. As SafeMode snapshots are immutable and cannot be eradicated manually, the recovery process can be started as below.

To recover a destroyed file system:

Based on our simulated attack, restoring the file system is just the first step to recovery as both the Veeam backup data and the File System (NFS) were destroyed. The next step is to revert the File System to a previous snapshot before the data was deleted/compromised.

Reverting the file system to a previous SafeMode snapshot requires the intervention of Pure Support. The FlashBlade administrators are not allowed to perform a filesystem rollback using GUI or CLI. The company designee needs to contact Pure Support to complete the restoration process.

Note: Purity does not allow snapshot restore by an administrator with SafeMode enabled. An error message is shown whenever Administrators attempt to revert a snapshot.

Scenario 1) The backup records in the Veeam configuration database were not destroyed.

Scenario 2) The backup records in the Veeam configuration database were destroyed.

Adding a FlashBlade NFS Share to Veeam as a Backup Repository is covered in part one.

The simulated attack described above, involved deleting the backup records from the Veeam configuration database but not from the NFS backup repository. Therefore the following steps are performed.

After the rescan is complete, the restore points will reappear under Backups > Disk (Imported).

Veeam can now perform an Instant Recovery to immediately restore VMs by running them directly from the backup files that are stored on the reverted NFS backup repository. 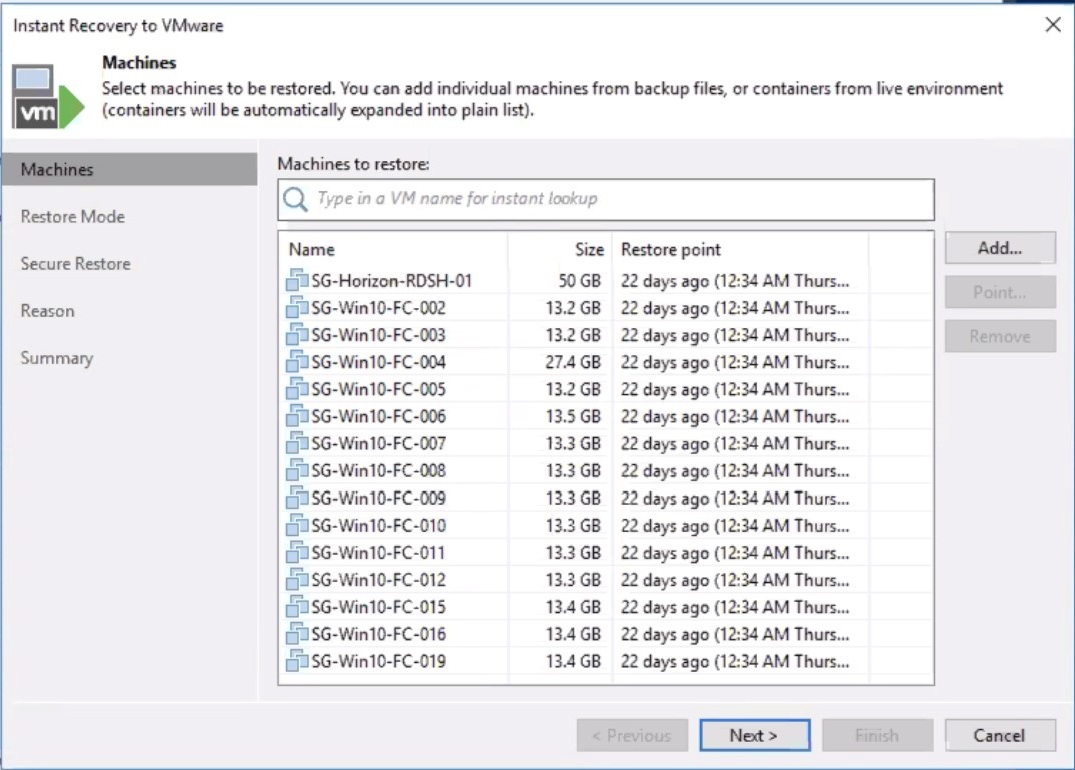 The following screenshot shows the restored VMs that are available in the vSphere Client. 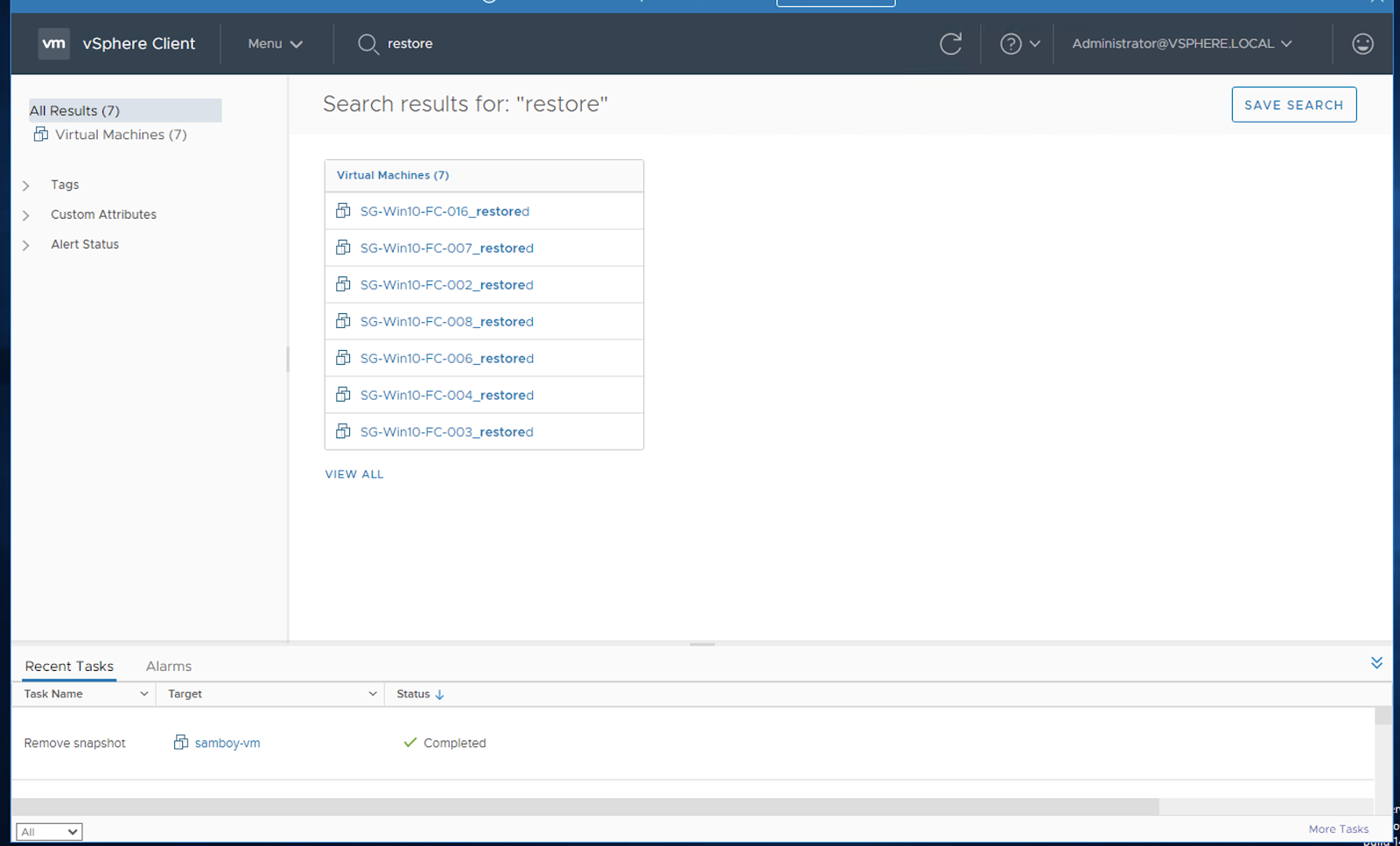 Following are a few caveats about SafeMode that customers should be aware of:

It is important to consider the security of the device as well. If the storage device can be easily taken over, then the software layer providing the storage immutability may not be of much help. Fortunately in the case of Pure Store SafeMode, even if the management GUI was accessed, the rouge administrator cannot factory reset/wipe the storage and manipulate the storage snapshots.

To further increase security, Multi-Factor Authentication (MFA) will be introduced in an upcoming Purity release (v6).

While not required, it is recommended to configure the Veeam Backup & Replication (VBR) Configuration Backup inthe same NFS Backup Repository. This simplifies the VBR server recovery when the server is corrupted or unavailable. A new VBR can be deployed and the Veeam configuration backup can be recovered onto the server.

The Pure Storage FlashBlade is an on-premises backup storage that provides immutable storage for data such as Veeam backups. By configuring SafeMode it provides an additional layer of protection against ransomware/cyber-attack.

In the next blog post of this series, we will be discussing how Object Storage presented from the FlashBlade will be used as a backup repository target for Veeam Backup for Office 365.

To restore a non SafeMode snapshot: